This is a portrait for my Aunt Joanne and my Uncle Tom! It's of their persian cat Zackary. It was a surprise for them (I didn't even tell my Mom about the top secret project!) Since it's already been given as a gift, I figured it would be ok to post it! 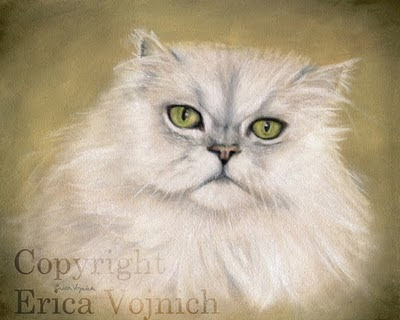 Zacky's Portrait is an 8x10, Pastels on Velour Paper.
Posted by Erica Vojnich at 7:26 AM No comments:

So it's been a while. I would like to apologize for the long break. I had a neck injury from an accident and was in bad shape. There wasn't much that I could do that didn't result in pain. So under doctors orders, I need to take a break so I could get back in shape. Now I'm slowly getting back into things.

I do have many things to blog about! I won Best in Show in very tough international art competition! I also have been selling prints of my work and portions of the proceeds went to various organizations. So I have many things to be grateful for while I was going through this ordeal. The one thing I've learned is true, I'm even more grateful for my work. Even though I can't sit at the drafting table for a long periods of time, it's become even more rewarding for me now.

One thing that happened recently that I would share with everyone, I had the opportunity to meet one of my idols, Denis Leary! I have always loved his comedy and his spirit. I'm a fan of Rescue Me and The Ref is one of my favorite movies. Mostly, I love the support he has given to NYC Firefighters. So when I heard that he was going to be at a book signing promoting his new Book, I knew I had to be there!

I decided to take it a step further and I wanted to give him something, however I only had a day to do it (I heard about the book signing the day before). I knew he has a huge love for Irish Wolfhounds. At one point, he had five of them. Clancy, is the one that most of his fans know about. He was even on Rescue Me and featured in his Roast. Sadly, Clancy passed away while he was writing his last book. So I decided to draw a portrait of an Irish Wolfhound and hope that the coloring would be close to Clancy. There was a small picture on his website, but the footage from his Roast was very helpful. So I after 8 hours I was able to finish it and frame it. Thankfully, I had time to scan it too. 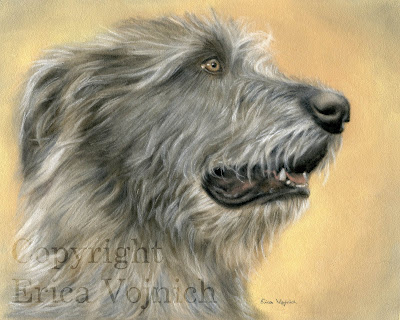 To say I was nervous is a huge understatement. I also was wearing heavy layers because I assumed we were going to be waiting outside (we live in NJ near NYC, it's very cold right now). We ended up being inside, so I was overheating. So being very hot and nervous wasn't a good combination for me! I was very happy that I didn't faint or do something that would have mortified me when I got the front of the line. When I got to meet him, I think I said something along the lines of "Hi Mr. Leary, I know how much you like Irish Wolfhounds, so I made this for you. I tried to find a picture of Clancy so I could get the coloring close to his." He said, "Oh Wow! Do I get to keep it? It looks very close to Clancy!" So hopefully he like it and wasn't just being nice to later put my work in the creepy stalker gift pile.

Anyway, he pose for a picture with us (that's my handsome hubby Marc, he's also a really big fan of his). I honestly could have cried I was so happy! It was a great day! (Told you I was overheating, look how pink our cheeks are in the picture!) 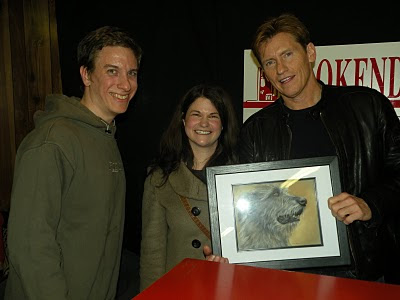 While I'm working on some new art, I thought I would post a video for your entertainment.
Here's one of my favorite videos, it's of my Mom and Dad's cat Valerie. I love this cat so much! She's a very sweet!
Here is a portrait I did of Valerie. It's also one of my favorites. It was one of my first pet portraits and I gave it to my Dad for Father's Day. I know I've changed my techniques since this portrait, but there's just something that I like about this one. I have the tendency to be a bit critical when I look at my older work, by this one gives me warm fuzzy feelings. Probably because I have such a soft spot for Valerie. Her little nickname is "Moo Moo." When she was a kitten she would walk around the house saying "Moo Moo!" it was just too precious! I think I should dig up her kitten pictures! 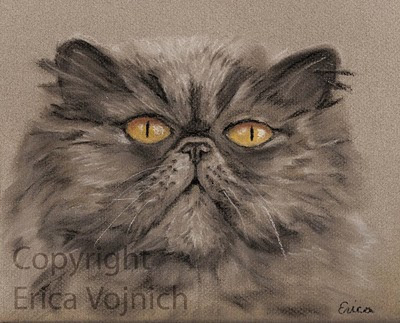 Mr. Fancypants' Portrait (with a tutorial)

Yes, that's his name and I love it! He's called "Pants" for short. This commissioned piece is being given as a gift. I love top secret portraits It's so much fun to have everything be a surprise! 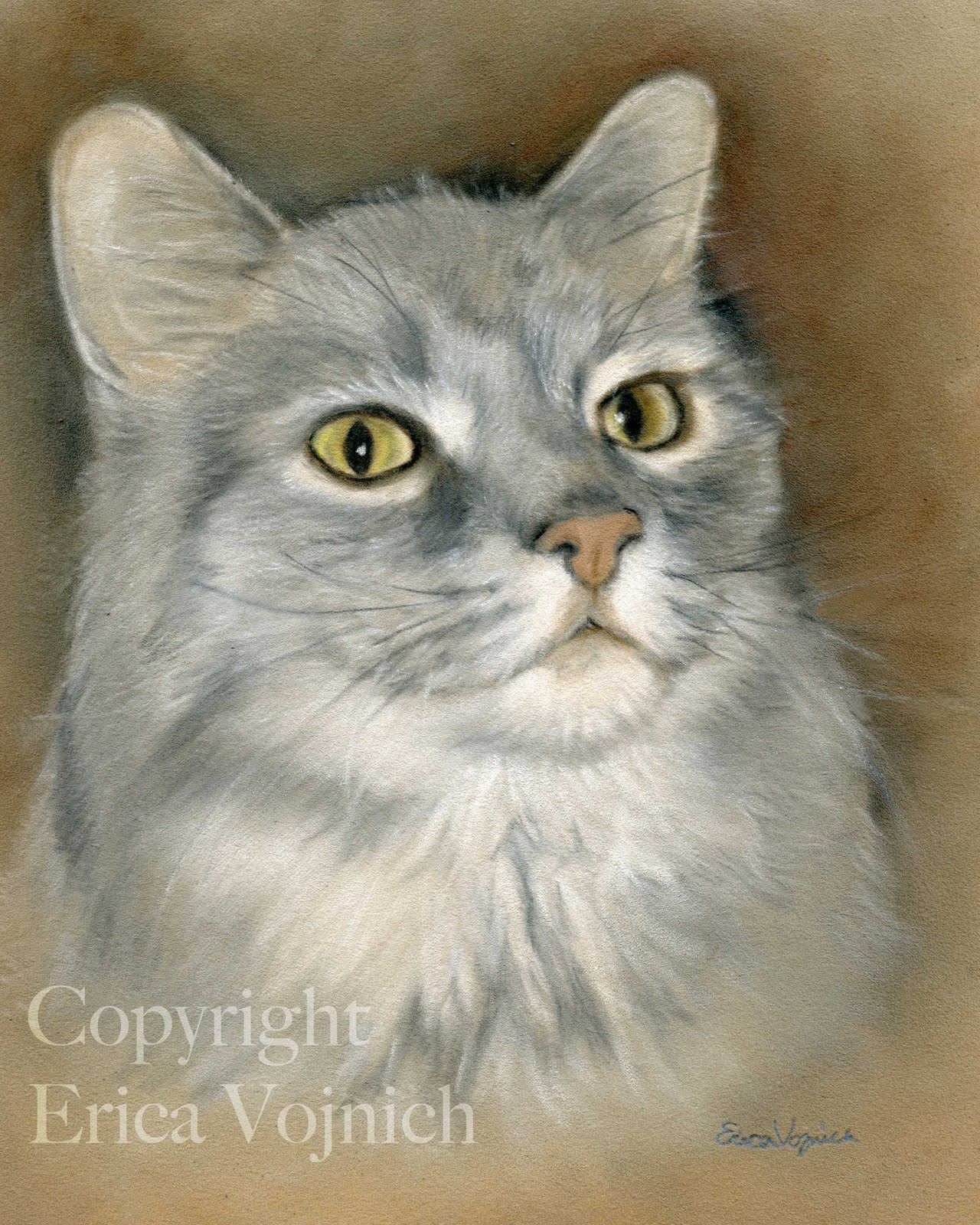 I figured this would be a nice entry to talk about the materials I use and some of my techniques.
Mr. Fancypants' portrait was created on Hannemuhle Velour paper. It's a wonderful archival and acid free paper. There are some issues with using velour paper, but I have some tips. With velour paper, erasing is out of the question. It's best to layout the drawing with a light layer of pastels and continue building the drawing. It's also possible to draw a sketch and then transfer the drawing onto the velour with carbon paper. Paint pigments also like to "dust off" velour paper. I don't like using fixative with my pastel pieces. I know this is a big debate among artists, but I'm not a big fan of fixative for pastels. To get around using fixative I use a brand of pastels called PanPastels for very large areas. This brand binds to paper very well, I highly recommend it.
Here are some progression photos of Mr. Fancypants' portrait. This tutorial is mostly going to show how I create detail in fur. Later, I will have a tutorial on eyes since it's such an important part of any portrait. I took these photos while my work was on the drafting table.

(Please click photos for a larger view.) At this stage, I've blocked the major areas with the PanPastels. I'm preparing to go into the areas where I know that fine detail will be important. I know the frame will be black and white, so I'm keeping those colors in mind while I'm working. The velour paper allows me to layer colors together. I know I want the background to have brown, grey and black shaded together.

At this stage I went back in with more brown colors in the background with the PanPastels. Then I started to go into the fine detail areas with Derwent pastel pencils. It's important to have sharp points on the pencils during this process. I like to use sandpaper to keep them sharp. I never use a pencil sharpener because the pencils are very fragile. It's important to pay attention to the direction of the fur while adding in the fine detail. I used Burnt Umber 54F, Brown Ochre 57 B, Sepia 53 F, Sepia 53 D, French Grey 70 D and French Grey 70H.

At this point, I know the final stages are near. I added in the color into the cheeks for the whiskers. I built up the background some more. I blended in some of the detail with a paper stump. I built up some of the color in the chest. In the final stages, I add shading in the inner ear, along with fur. Then I add in the whiskers with Chinese White 72 B and Ivory Black 67 B pastel pencils.
Hope this all was informative! This was my very first tutorial! Please feel free to leave comments or questions!
Posted by Erica Vojnich at 6:34 AM 10 comments:

A while back, I was contacted by The National Zoo to see if I would be willing to donate some art for their annual Zoofari auction. I'm a big supporter of The National Zoo so I was very honored to help them. I wanted to draw two of their Western Lowland Gorillas, Mandara and Kibibi. During my last visit to the zoo, I was touched by Mandara's nurturing instincts. I wanted to capture the feelings of hope and love that I felt watching them. 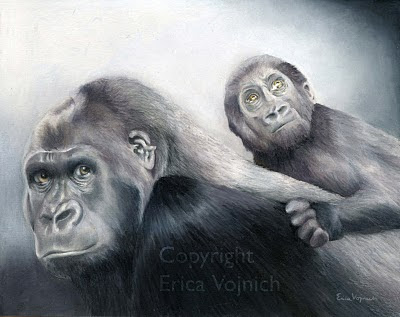 I decided to title the piece, "Looking Forward". It's 11"x14" created with colored pencil on Somerset paper. I love working in colored pencil! The medium can be time consuming to work with, but the results are very rewarding. It seems that even grey tones can become vibrant with this medium. (Please click on image for a larger view.)
Zoofari 2010 will be on May 20th. It's considered one of the best events in Washington D.C. featuring more than 100 of the area's finest restaurants. If you would like more information on the event, please visit The National Zoo's website.
Posted by Erica Vojnich at 7:14 AM 6 comments:

Did I say 3 pets? Well, we now have a 4th pet! I do believe that we have a full house now!
Let me introduce you to Lorna Dune! My husband and I were considering changing her name, since all our other pets have "S" names, but we just love calling her "Little Lorna". Lorna is a rescue and a former breeding dog from a puppy mill. She has been doing so well in our home! Stella and Lorna are best buddies now. 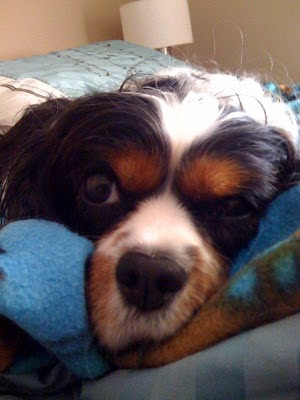 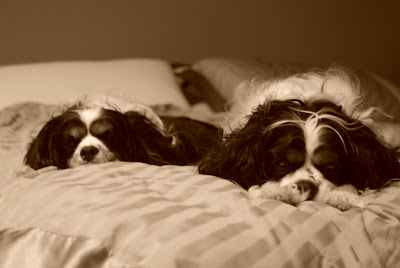 I'm happy that they both enjoying sharing a big dog bed in my studio!
Posted by Erica Vojnich at 8:29 AM 4 comments: